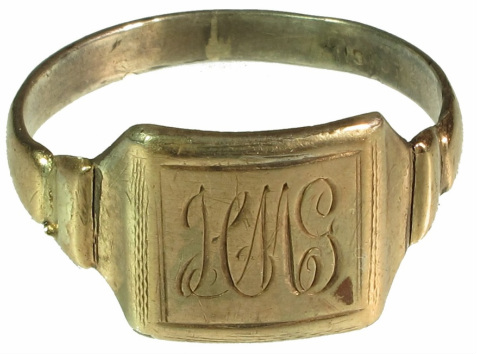 This is the Royal Navy Gold Ring (Her Majesties Ship) from the 1700's that I found on my very first England hunt. Recovered September 26, 2010. This is still one of my favorite Colchester finds that I almost missed. I was scanning as usual and got a short "chirp" on my detector. I stopped and scanned back and forth several times but nothing. Still curious I put my White's V3i in Boost mode and picked it right up. It was about 7" to 8"down. It was first identified as a Georgian Signet Ring. The Georgian period is from 1714 to 1811. It was quite bent when I retrieved it. Our club works closely with a goldsmith in England who does an incredible job of straightening out coins. At the time I found this beauty, he had not straightened out a ring for our club. Mine was to be the first. I requested to have it straightened with no hesitation. I was thrilled with the outcome. During the repair process it was determined that the HMS engraving stood for "Her Majesties Ship", most likely a sailors lost ring from the 1700's.
July 21, 2012. I was with hunting buddy Chuck Hosbein when I recoverd this beauty. 10K gold with a very small diamond. This is a ring that actually looks much better than the pictures show. The cut designs really sparkle in the light. Another beach find in the hard pack sand at low tide. It was just my 3rd target for the day. I was in a slump for a gold ring so hopefully this one will get me going again!
August 11, 2012. Fun day at Cocoa Beach. Found these 3 rings along with a very nice bracelet watch and a big black handle pocket knife in very nice shape. The knife and the watch must have been a recent loss as both are in real nice shape. See both on my "Neat Finds" page.
This ring is a monster! Heaviest Silver ring I have ever dug. Weighs right at one full ounce. I was with hunting buddy Bill Preston in a local park. When my coil went over the ring it yelled at me as you can imagine. It was only 3" deep and solid black when I retrieved it. Initially I thought it was a large nut for a bolt. Jokingly I yelled over to Bill that I had a large ring. As he walked over I was wiping it clean and noticed it had no threads but had writing inside. I knew right then I had a ring.
November 29, 2013. Just a couple days earlier I was hunting at the beach and banged out a silver ring and a nice silver sand dollar necklace. The wind and stormy weather coming in from the Northeast had washed away around 8" of sand which is prime for uncovering what used to be deeply buried jewelry. I shared this info about the erosion with FloridaChuck and FloridaBill so all 3 of us headed back to the beach. We all banged out a lot of coins. Chuck found 2 nice rings, a Silver and a Titanium. I found the 3 pictured rings. The silver ring was way down about 8" or more. The next ring I found is a gorgeous Titanium ring that really looks like gold. It is a very large ring and I am guessing it was a wedding band. I finally struck gold near the end of our hunt with this custom initialed "KLS" 14K Gold band. 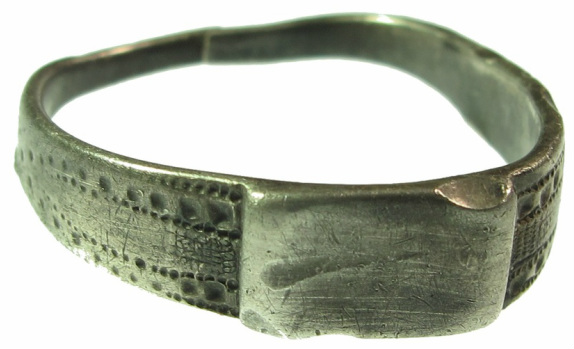