An Amazing Two Weeks!.....as written by MinnesotaMindy our team leader.


MDRon and Jack, FLRob and Chuck, ONTJim and CALGail...In all ways, my last team was exceptional! Extremely compatible, fun, helpful around the barn house, absolutely no whining or complaining whatsoever. Even if we'd found absolutely nothing I'd have loved these guys and gal! But right at the start we also had an exceptional hunt: Near Heathrow, where we put in a few hours the first afternoon, we found dozens of mostly modern greenies (and a few George V silvers), then Ron popped a 9k gold ring, which set the stage. First afternoon on aunties was productive, but the next day on some relative new Hamish land, Ron found one of the best club finds EVER, that Bronze Age ring gold pair. Weather continued to cooperate so we were able to get in to some Auntie's land near the church that I'd been coveting since last year. It had all the makings of a huge site. Near the old church road, just across from the church itself and behind Layer Hall (the original one which had obviously been demolished and spread in the field). I wandered in and out of that area on field 17 but then Jim stumbled onto crotal bells and farthings literally ON THE SURFACE. We hit it HARD all day and came up with such an astounding collection of silver and relics in great condition that Chris dubbed it a possible small fair site. It certainly had to have been in pasture for a long time as the finds were amazingly intact. This is the kind of Giving Field we all dream of! Last year it was in rough plow and unhuntable; this year I was thrilled that our team was the first on it, and that certainly paid off! Subsequent teams also did well on this small plot, and a new plowing next year should sweeten it up again. Other land produced well and was easy to hunt as the rain mostly stayed away. Guys, Hamishes, Hardy's, Aunties, Ron found that sweet portuguese gold coin at Guys, then later a very interesting gold ring. That makes FOUR gold for him! Jim found yet another gold ring near the Burial Mound. Many more silvers and other goodies came out of Guys land recently plowed and i envy anyone who gets to hunt that fluffy land after Guy rolls it! Pedlars was still in stubble BUT I personally found another THREE great hams right up where the bulk of the silver had been found originally. Gail and I both found hams at the far end of that field as well. I was digging silly signals I'd have ignored during the field's hay-days...and digging those signals paid-off big time.I FOUND MY FIRST COMMONWEALTH PENNY!!!!It's true that when you're on a quiet field, you get bored and dig virtually everything. More new land and new/old land is coming on line soon, and the weather continues to cooperate. The teams hunting these next three weeks will do amazing as well, I'm certain of it! I'm also looking forward to another stellar performance from my next team of Mary/Clarence, Stuart/Lois, CanRon and BostonMike. SWEET!

Below are comments from some of the team members.

Hi Mindy,
I just wanted to say that this was the best detecting trip I have ever been on. It was an absolute blast.
You did an amazing job of putting us on the right fields. Sure does help when everyone finds some great relics.
But, even if we hadn't torn it up, all the guys and gals made it a wonderful experience.
I also want to say that the food you cooked for us was a real treat. It was gourmet for sure.
Thanks again for a fun trip
Just remember the hammy song ( inside joke )
Jack


Absolutely fantastic hunt with the best team I've hunted with so far. And Mindy, don't forget our new theme song...If I had a Hammie...LOL


It was by far the best hunting trip or detecting experience I've ever had, as special thanks goes out to Mindy for making all the meals for us hungry hunters and putting on some great dirt!!
The team was the best, a total blast as the laughs seemed to be going from the morning to night fall, it couldn't get any better.
To Quote Julius Caesar — 'Vini. Vidi. Vici. We came. We saw. We conquered
YES! "If I had a Hammie"


Sorry I am so late to this posting party, but I am extremely glad I was part of the great hunt itself. Mindy, thanks for taking such wonderful care of us. From the food to the fields, you made sure we had the best! It was quite an experience to hunt with such selfless, generous people. If one found a "hot spot", everyone was invited to the party. Those two little interlocked gold rings from the Middle Bronze Age are certainly my find of a lifetime, but the entire two weeks will be remembered more for the people and the fun, than the recoveries themselves. Good luck to Mindy and her next group!

Tudor Silver Thimble below as posted on the Colchester England Website.

Tudor silver thimble from the 1500's. My first real treasure find and probably my best ever find to date in England. The British museum has this right now. They will decide whether to keep it and place it in the museum or return it to me. Either way I am happy as they will pay me and it will be in the museum with my name on it as the finder or they will return it to me and I will build a nice glass case display case for it.

Unusual find that I just had to show. This is a metal ID ring that is placed on a birds leg. I have found these in the past but this one just happens to still be attached to the bird leg.
On every hunt trip I have made to England I have found a lot of old buttons. I have the bulk pile pictured above along with 7 of my favorites.

Complete listing of all my finds below on the export papers...
My thimble and a hammie are not pictured as the thimble was reported as treasure and the hammie was being straightened by the local goldsmith. 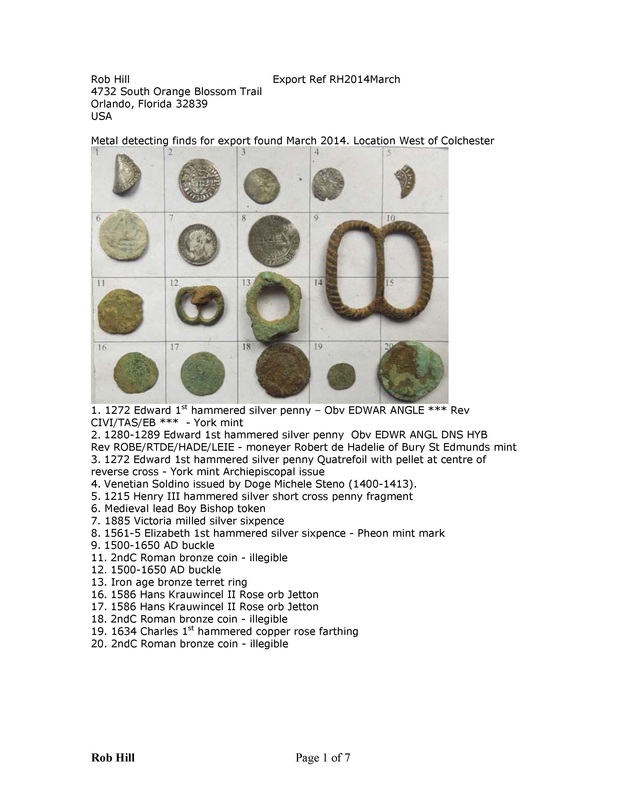 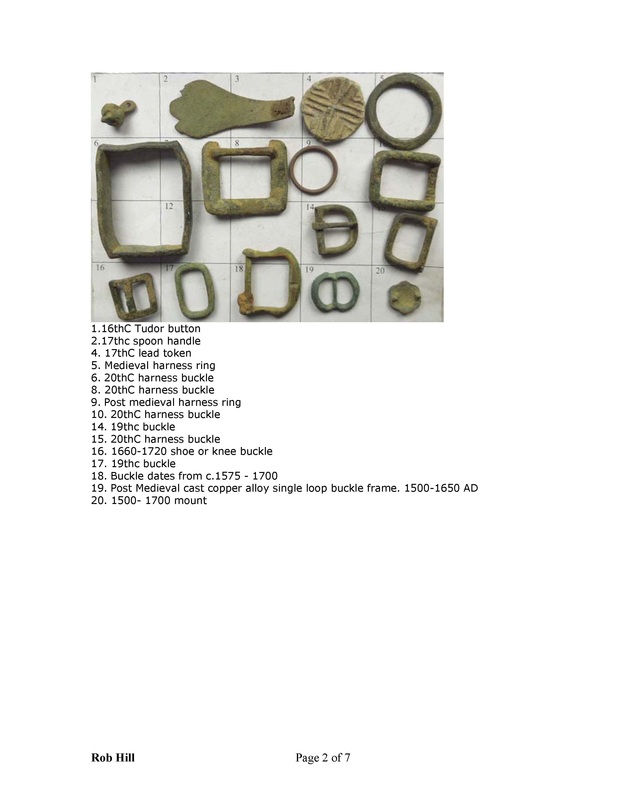 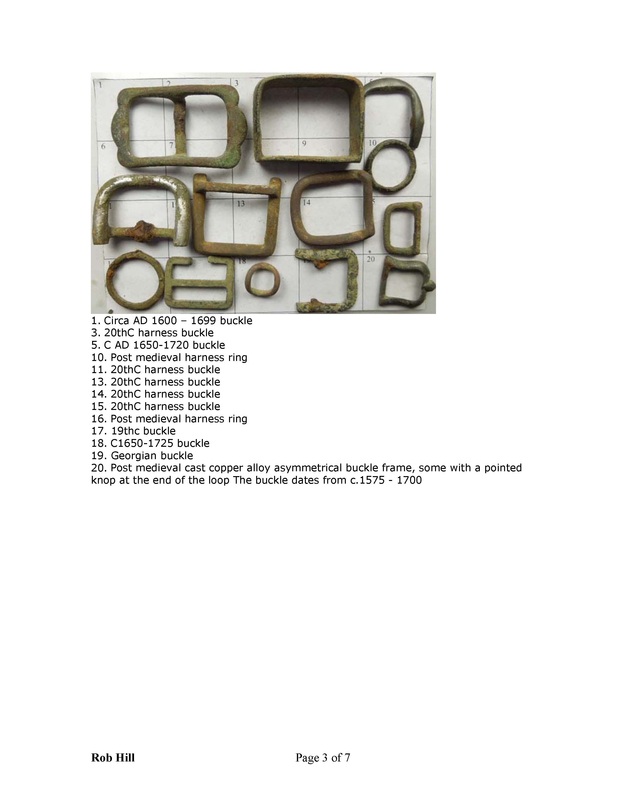 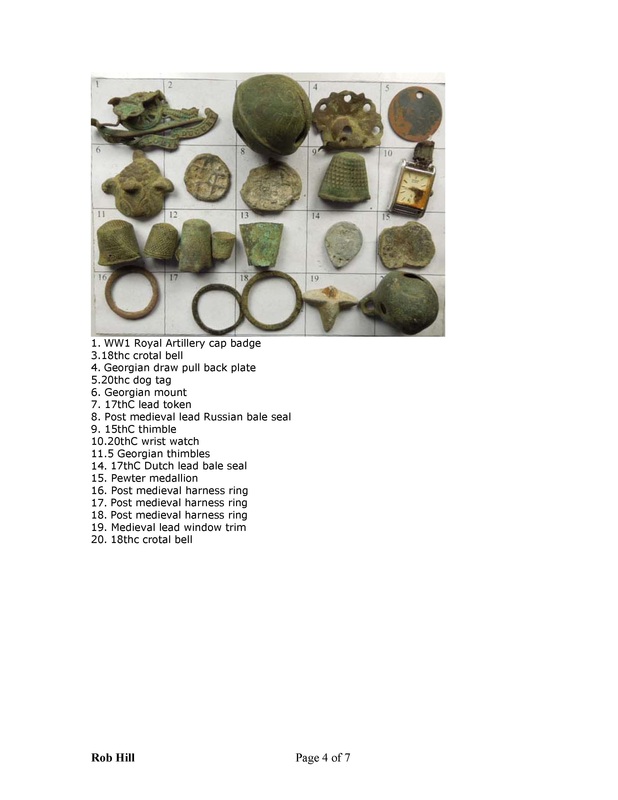 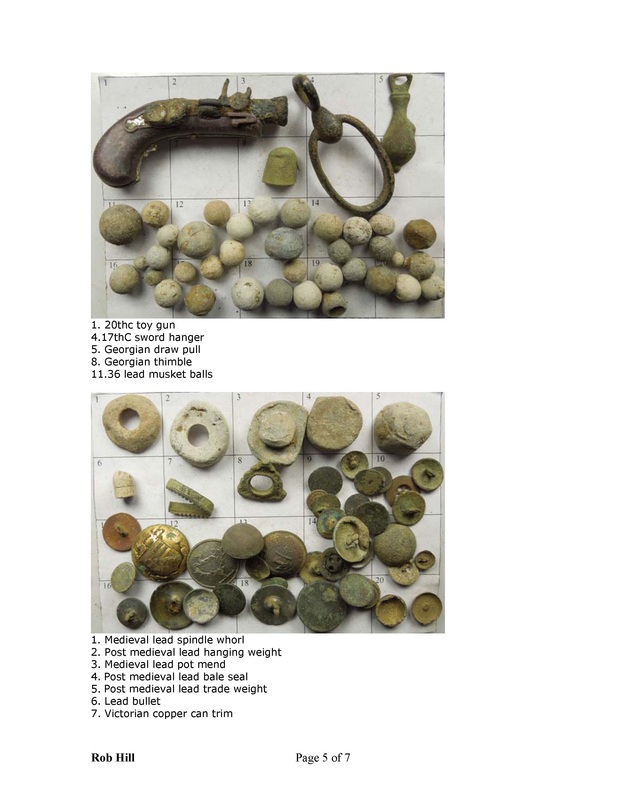 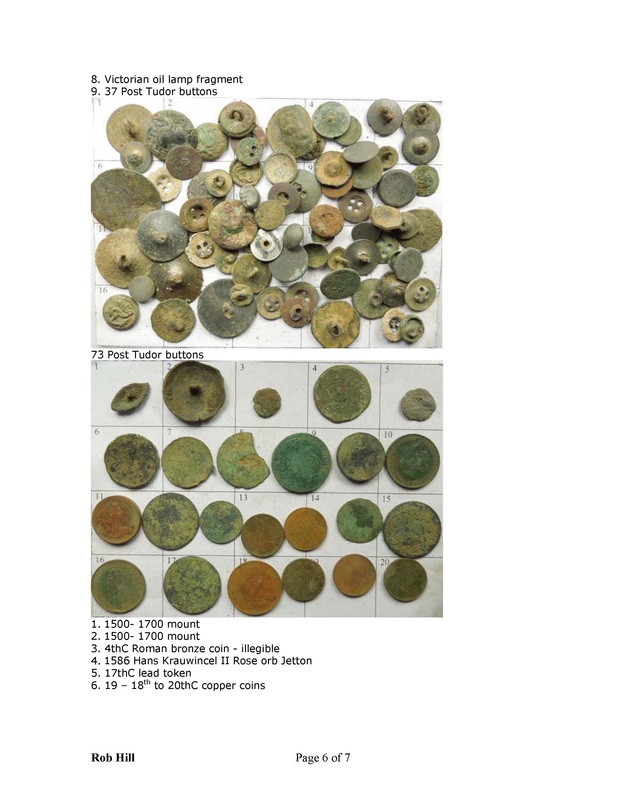 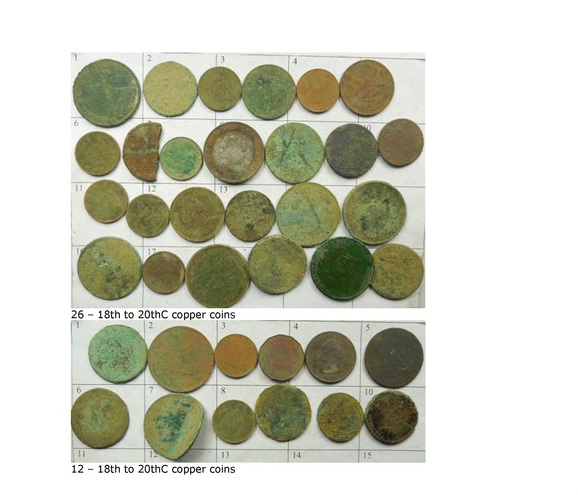