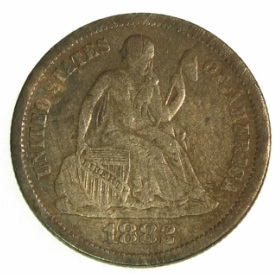 To date this is my favorite U.S. coin find so I thought I would feature it in the banner above with a short story of the find. February 2, 2013. I was with hunting buddies FloridaChuck and Jerry Hitson. Jerry invited us to hunt a Preserve in Osceolla County. I arrived first and thought to myself we would find nothing. This proves you just never know. The Preserve is basically just walking paths back through the woods. The only past activity in the Preserve that I know of was wildlife hunting and that thought was backed up with all the shell casings we found. We were all hunting close by each other when I got a good signal right in a sandy path. The picture above shows the path where I found it. I dug down just about 3 inches and popped a dime. It was so black I had a hard time distinguishing what it was at first. Once I realized it was a Seated Liberty Dime I was thrilled. I ran over to show the guys and we all got very excited. We hunted for several hours just gridding the area and nothing more was found. My thoughts are it was probably a random drop by some hunter. 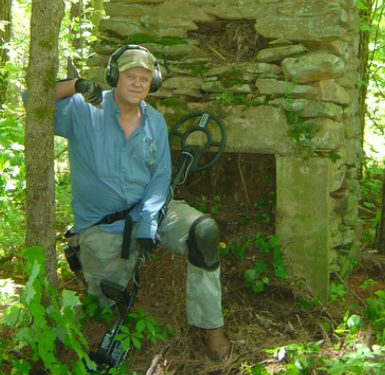 FloridaRob
Hunting buddy David Gray invited me to detect on some private land up in Elijay Georgia. He had access to a lot of acreage which had several old homesteads on it.  We found 2 such homesteads that were out in the middle of nowhere. All that was left were stone chimneys such as in the pictures below. We were very excited with the potential but 2 days of searching both sites we found very little. Over 100 years of decomposition buried most potential finds way too deep. The items we did find included an old bottle, a big brass buckle and the double edge axe head as shown below. I think the smaller items were just buried too deep. Had a great time just getting out for the hunt and the adventure. Sometimes you hit it big and other times you don't.