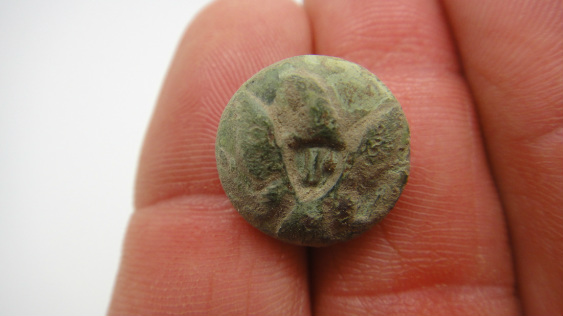 I dug this beauty. My first Civil War Infantry "I" Eagle button.
This was my first time relic hunting in Louisiana and I was not disappointed. All three days had some nice finds and the weather was absolutely fantastic with no rain and the temperature was in the mid 60's during the day. We lodged at a mansion that was built in 1912 and it was gorgeous with a lot of history. We had a 5 man hunt team and what a great bunch of guys.

Chuck and Jerry had exceptional pouches. Just a sampling, Jerry had an 1856 Seated Liberty Quarter, a 1840 Seated Liberty Half Dime, a 1600's 1/2 Spanish Real and a general service Eagle Button. Chuck had 2 rare Eagle V buttons and an incredible Pre-Civil War Powder Flask. It was a hard decision to pick the best pouch but the Powder Flask pushed Chuck over the top and by vote he won for best pouch. Sal found a beautiful 1839 Seated Liberty Half Dime and Scott & I had nice Eagle buttons. We all had some civil war bullets and other various relics.