This page will include a little bit of everything that I have found in my metal detecting and treasure hunting adventures. Artifacts, coins, collectibles, junk (that I like) and other odds & ends.

The 3 items above were part of one of my funnest hunts. I got permission to hunt an old Boy Scout camp that was owned by the Boy Scouts from 1910 til the 1950's. I was with 2 of my hunting buddies, George Case and Bill Green. Before the day long hunt I mentioned to my buddies that I would really like to find an old Boy Scout scarf slide. About an hour into the hunt my wish was granted with a neat brass commemorative scarf slide (top right) featuring George Washington, a Scout Master, 2 Boy Scouts and the Boy Scout logo. I was thrilled and would have been satisfied with only that find.

However a little later I dug a 1950's era Boy Scout whistle. That was a challenge. One of the deepest targets I have ever dug at better than 10" and I'm not kidding. It was hard ground and the whistle was right under a root which was the same diameter as the whistle. I could see the shiny rounded whistle sides under the root and it really had me puzzled as to what it was. I had to dig around the root, one finger scoop at a time but boy was it worth it. I love anything with the Boy Scout logo on it being a Boy Scout myself as a youngster.

Not long after finding the whistle I had another hit that was almost as deep and just 10 yards from the whistle location. I dug down to find a brass case that was closed but not snapped shut and it was very heavy. I was immediately excited about what might be inside. Before looking inside I called my friends over to witness the grand opening. A lot was going through my mind as to what might be inside specifically old coins. Once both guys arrived I opened the case and it was packed full of hard dirt. I carefully removed the dirt a little at a time. No coins but still an incredible find. Researching it on the internet I found that it was a handy pocket "Sun Watch" made by the Ansonia Company pre1920. It has a compass built in along with a sun dial. Inside is a metal plate with latitudes for various cities in the US. Also inside is a bar that pulls up that will cast a shadow of the sun to tell the time. They were carried by Boy Scouts and avid outdoors-men. According to the internet it is very rare as they were only made for a short time. 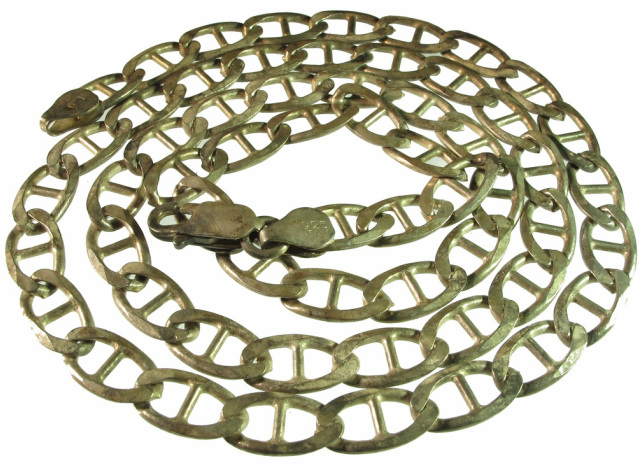 24" Silver necklace. I found this one in a local park only about 1" deep. It was entangled in the grass roots and seemed like it would never end as I was pulling it up. 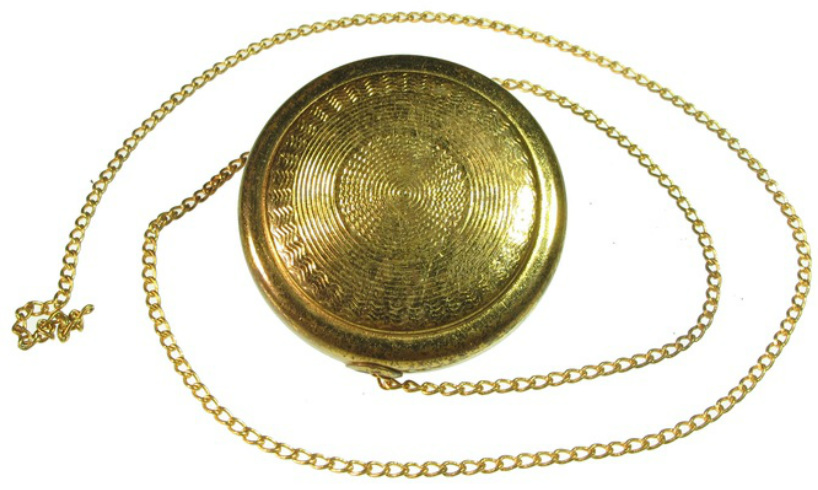 This is a weird piece of jewelry. The chain is spring loaded and is supposed to wind up inside. Anyone have any ideas?
JUNK. But I like it. Whenever I find this stuff, which is quite often I just throw it in a jar. I find keys and costume jewelry just about every where, in parks, home sites and the beach. Almost all the lead weights are found at the beach. If I put all the pop tops I have found on here I would need another page.
Like many detectorists, I have a goal of finding a gold coin. The chances of finding one are very very slim. In January 2010  I decided to save every coin I found towards buying that gold coin. That way I would indirectly have that gold coin from metal detecting. I probably have enough right now (July 4, 2012) to purchase a small gold coin but I do not want to pull the trigger yet as I still prefer to uncover one. I'm trying hard. 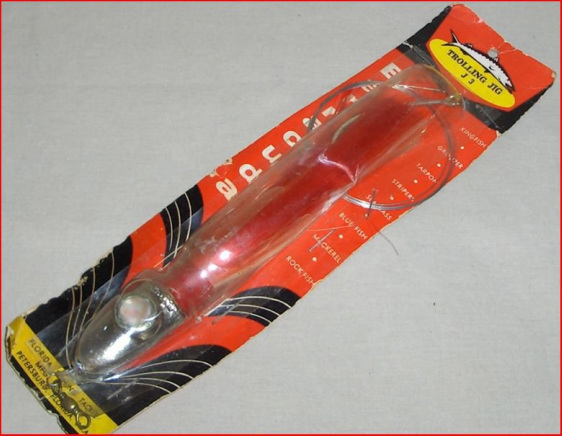 Hunting buddy Jim Fielding posted my find on the popular blog site "The Treasure Beaches Report from Florida's Treasure Coast, Metal Detecting for You." In just a couple days one of the subscribers sent in this photo.

Here is what the host, TG writes after the identification: It  seems there is consensus and some very good information on yesterday's mystery  find.  Just after posting yesterday's post, it occurred to me that it looked a  lot like a jig head.   "Barracuda" already made me think of vintage fishing  equipment because I had found some
Barracuda fishing items in the past.

I  was a little afraid that mentioning that
information in the blog might influence  other people and didn't know if I should have done that.  It seems now that it  didn't matter. I  received the following  photo from Michael T. Here is the photo sent in by Michael T.  Good  match, wouldn't you say?      Thanks  Michael.

Thanks  also to David S. and all of you who responded with information on this item.   Putting it all together makes me confident that we have the true identity.....TG

This Jig was made by the company 'Florida Fishing Tackle Mfg Company of St. Petersburg. They made the Barracuda line of fishing tackle and lures beginning in the 1920's. Not sure yet of the age on my find? It appears to be old. Stay tuned. 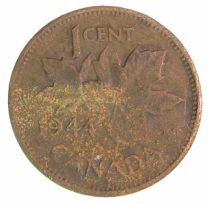 This may be my very best find.................very special meaning anyway. Let me explain. In July 2012 I visited my hometown in Clifton Forge Virginia with a plan to visit relatives and of course metal detect. I was staying with my Aunt who lives in the home that my Grandfather built in the 1920's. My mother and father built their own home too, right in the back yard of my grandfathers home. My father who was from Canada, was a tail gunner on a Lancaster and fought in WWII. When the war ended in 1945, my father headed back to Clifton Forge where my parents would continue on with life. My father flew many sucessful missions in the war only to come home and get killed in an automobile accident in 1957. I was only 4 years old so I never really knew my father that well. I was detecting in the front yard of where my parents' home was. The home is gone and is just a slab now. I dug a few goodies including 1927, 1942 and 1945 wheat ear pennies. I also dug this 1944 Canadian penny that got me thinking. How in the world did this older Canadian penny get way out here in the wilderness. Then it hit me. It must have belonged to my father. I spoke with my mother about it and she confirmed that he spent a lot of time out in the yard working in that same area where I had found the penny. He had arrived back in Clifton Forge in 1945 from Canada and the odds are that he had that penny in his pocket before losing it in his front yard. That is the most logical explanation. It would have been a new penny at the time my dad had lost it. Obviously there is no way to prove it either way but the odds are it was his and now it has been passed down to me in a very unusual way. 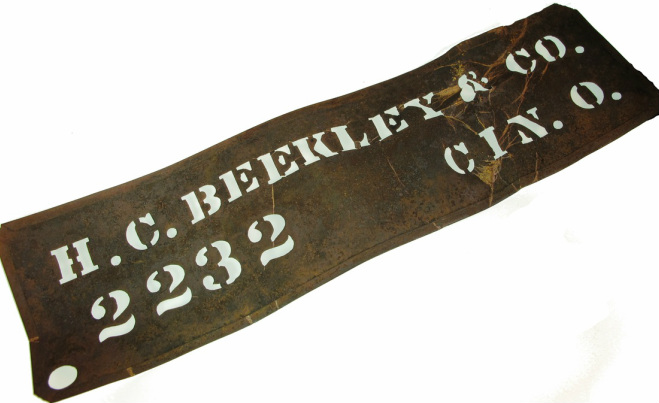 I found this old artifact in a lake in Clermont, Florida. Obviously it is a stencil but I didn't know any details. I think it is made out of thin brass. It's in extremely good shape for being in the water for 100 years! One of my hunting buddies, Jim Fielding is very good at researching. He sent me a picture of the post card below along with a little history. The H.C. Beekley Company was in business in the late 1800's and early 1900's so I consider this an outstanding find......Jim, thank you for your time and effort in identifying this find. 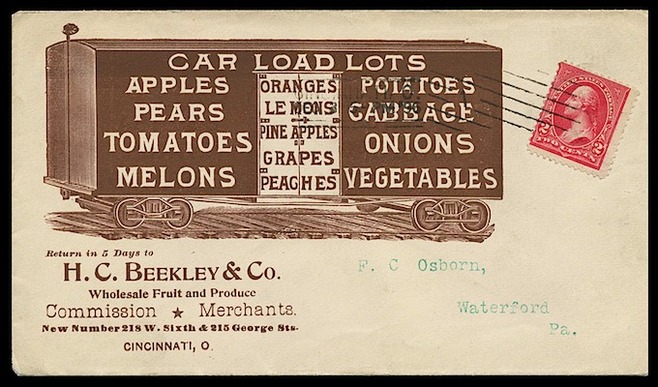 I also attached a picture of  H.C. Beekley's, what was known in the late
19th Century as an "Advertising Cover," sort of a postcard with the company's
little ad or slogan on it, picture of a rail car listing all the fruits and
vegetables they freighted all over the country. I don't know if Beekley
actually  grew the crops it shipped, but I would venture to say that the
artifact you  found was used to stencil shipping information on crates of
produce.

Jim
October 13, 2012. Hunting buddy Chuck Hosbein and I found a couple vacant lots where homes used to be. I dug this ratty Buffalo Nickel and also 3 Wheat ear Pennies, a 1926, a 1944 and this 1910 which is the oldest Lincoln penny I have ever dug. 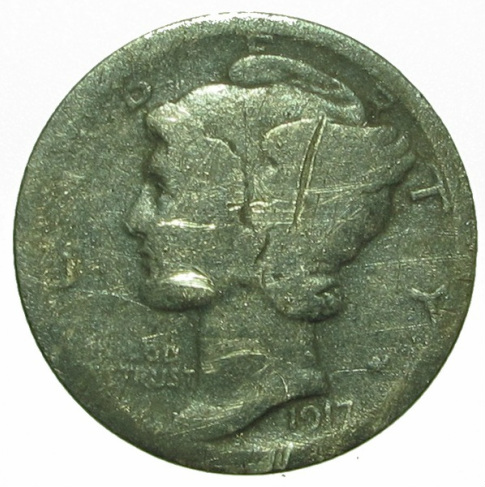 December 15. 2012. Wow, just 3 weeks after finding the 1919-D Mercury Head Dime I banged out my oldest Merc yet, a 1917. This was also a local park find but a different park. I guess these things come in spurts. 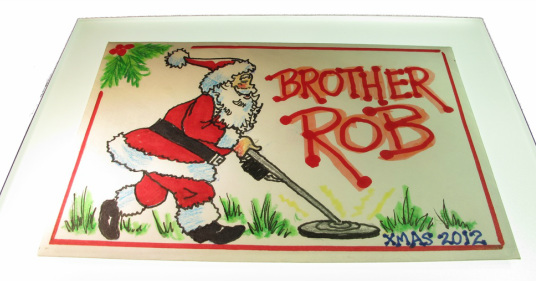